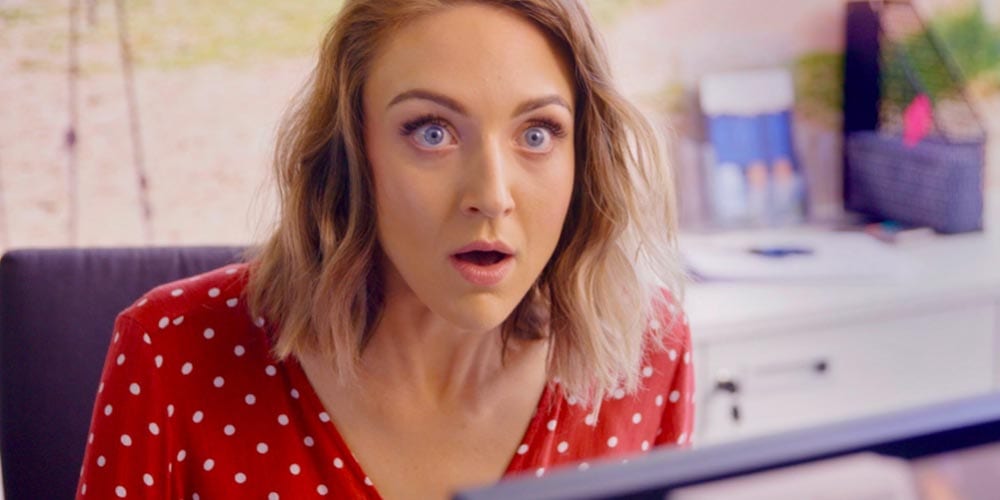 These days, social media is a very necessary tool for creatives to promote and share their work. One acting couple has found a unique way to do just that. Holly Shervey and Emmett Skilton, who previously co-created the award winning web series Auckward Love (along with friend Jess Sayer), have developed a new snack-sized show that’s about to return to Instagram for its second season.

Auckward Love collected awards at international festivals, and won the award for Best Actress at NZ Web Fest in 2017. Emmett and Holly hosted the awards ceremony in 2018.

After the success of Auckward Love, Emmett and Holly decided to undertake a new project, and came up with Millennial Jenny. They released the show, exclusively on Instagram, early this year. Each episode is about a minute long, designed to capture the attention of millennial users scrolling through their feeds.

The show revolves around Jenny, played by Holly, a twenty-something with a lot of ambition and entitlement hiding a heart of gold. Holly’s fiancée in real life, Emmett, plays her disapproving boss. He offers the clueless character a much-needed reality check when Jenny demonstrates a severe lack of professionalism in the work place, as her creative desires interfere with her role as a receptionist.

“Jenny’s entitled and means well, which would actually be a great way to be,” says Holly. “Imagine being oblivious to offending and upsetting people.”

The show exaggerates and plays off the much-maligned stereotypical “millennial” to explore Jenny’s inner conflicts, while also comically capturing a millennial moment.

“Millennials get a bad rap,” Holly says, “but actually we’re not bad people.

“People might say we’re self-entitled but we do have this deep, deep need to make a difference. We’re actually a generation that’s super aware for the most part.”

The show evolved after Holly created Jenny as a way to explore both writing and acting. “I put up a video on Instagram for a show reel scene and it was really popular, plus I loved the character. I was like ‘Oh! How exciting would it be to make more of this.’

Although made in New Zealand, the cast speaks with American accents. American script supervisor, Brian Burstein, ensured the characters were using the correct vernacular. Burstein was here on US drama series, American Playboy: The Hugh Hefner Story. The show was shot in New Zealand by Stephen David Entertainment, one of Screentime’s siblings in the Banijay group. Emmett played Hefner’s close friend, Victor Lownes, opposite another Kiwi putting on an American accent – Matt Whelan as Hefner.

Emmet and Holly are using their Insta-series to showcase their talents to an international audience, and have ambitions to develop the material for an American network.

“I’m a huge fan of Comedy Central,” Holly says. “Having a show like Millennial Jenny on an American platform would be awesome. So I think that’s something to work towards.”

The show has been an experiment for the couple to explore how Instagram users respond to this type of material. It’s also given them an opportunity to explore the digital landscape with some snack-size narrative content.

“Personally, my favourite social platform is Instagram,” says Holly. “That’s where I like going to watch stuff and I just assumed that other millennials might want to watch stuff there as well.”

The show, which released in January, quickly gained a healthy following and plenty of enthusiastic comment.

“Each episode has over 10,000 views which is really cool,” Holly explains. “We’re now building a following with every episode we put up and also getting people on the Gram to share it and spread the word a bit. But we’re stoked to have that many hits.”

Despite releasing only a few months ago, the first season of Millennial Jenny has already collected its first award, winning Best Web Series at the Miami Independent Film Festival in May.

As for a fourth season of Auckward Love, Holly says, “We’ve got the scripts there ready to go, so who knows what the future holds.”

More Millennial Jenny will release on Instagram from Sunday 16 June.